E- Cigarettes Are Not a Natural Cure and Remedies for Smoking

Smoking is the leading cure of preventable deaths; statistics have revealed that smoking-related disease is around 15,000 per annum and the major cigarette-related diseases include cancer, heart disease and chronic obstructive pulmonary disease. 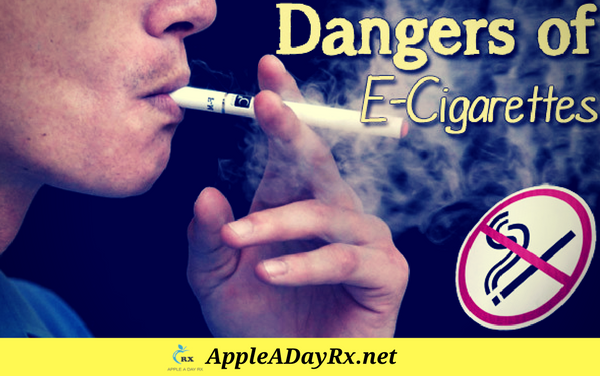 There is also an associated healthcare cost of over $650 million per year and over 750,000 days spent in hospital per year. Tobacco smoking kills more men than women – 9,700 men compared to 5,200 women with. Cancer is the number one cause of tobacco-related death being cancer.

We now know that globally tobacco kills 50% of its user.

Vaping is marketed as:

But is Vaping safe?

If E-cigarettes are marketed as less harmful, can it be part of a natural cure and remedies for tobacco smoking?

There has been a significant growth in vaping shops which has coincided with a slight decline in cigarette smoking, but there are many dangers associated with E-cigarettes /vaping.

A previous Apple A Day RX blog warned of the dangers of E-cigarettes/vaping. They are not natural cures and remedies for tobacco smoking.

A key study published in the journal Pediatrics found that e-cigarettes caused rising numbers of sick children, due mostly to swallowing liquid nicotine; one child died and several suffered comas and seizures.Another key Australian review study by Hess et al in April 2016 showed that E-cigarettes vapour contains elevated levels of nicotine, glycerine, propylene glycol, formaldehyde and acetaldehyde has the potential to cause adverse effects in adults and children.

Smoking whether it be E-cigarettes or tobacco causes DNA damage (through methylation) altering more than 7,000 genes which can contribute to the development of smoking-related diseases. Stopping smoking can reverse the effects but it can take decades.

The U.S. Food and Drug Administration has been proactive by taking action against internet companies that sell e- cigarettes to minors. However, while this action is to be lauded more needs to be done by the regulators and governments.

The Australian study by Hess et al was a key finding but the TGA have done little to prevent a future catastrophe from occurring as covered by “Sky news”.

Governments need to do a lot more to educate smokers, provide more funding for research into natural cure and remedies for smoking and perhaps consider raising taxes for both conventional cigarettes and E-cigarettes which will help pay for the ever- increasing healthcare burden.