Why Do Many Integrative Medicine Doctors Oppose the Use of Aspartame for Weight Loss? 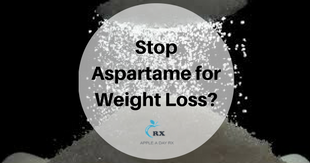 Aspartame is the most common artificial sweetener in use today. You will see it in the supermarket aisle e.g. Nutra Sweet, Equal. Conventional medicine has promoted its use in as a sugar substitute for people who wants to lose weight. It is used in cereals, sugar-free chewing gum, soft drinks/sodas etc. Though aspartame may sound like the best option for weight loss, integrative medicine doctors and practitioners of complementary and alternative practitioners oppose the use of aspartame as an artificial sweetener and there is good evidence to believe that it can cause more harm than good.

Research studies show that aspartame is not safe

A Complementary and Alternative Medicine study published in the J Neuropathol Exp Neurol. by Olney et al in 1996 revealed that there was a high incidence of brain tumours in aspartame-fed rats compared to no brain tumours in concurrent controls. Another study by Soffritti et al in 2007 stated that ‘low doses of aspartame beginning during prenatal life increases cancer effects in rats’.

The argument is that these studies are in animals and are not relevant to humans. However, there are several human studies that validate the view of many Integrative Medicine doctors and practitioners of Complementary and Alternative Medicine. For example, Englund-Ogge L et al in 2012 found that a high intake of both Artificial sweeteners and Sugar-sweetened beverages are associated with an increased risk of preterm delivery.

Aspartame is composed of phenylalanine (50%), aspartic acid (40%) and methanol (10%). As these three components, may have an effect on neural functioning, P Humphries in 2008 published a Complementary and Alternative Medicine in the European Journal of Clinical Nutrition (2008) and proposed that excessive consumption of aspartame may be involved in the pathogenesis of certain mental disorders and also compromise learning and emotional functioning.  Another anti-aspartame finding in humans was that many military and commercial airline pilots have lost medical certification to fly; based on seizures which occurred while they were ingesting aspartame.

Aspartame is safe, BUT…

Despite these research studies, the European Food Safety Authority (EFSA) and the US Food and Drug Administration (USFDA have completed a full risk assessment and concluded Aspartame and its breakdown products are safe for human consumption at current levels i.e. 40mg/kg of body weight.

Many scientists disagree with Integrative Medicine doctors and practitioners of Complementary and Alternative Medicine. The majority of scientific evidence indicates that aspartame is safe unless the person has the genetic disorder phenylketonuria. These people cannot process phenylalanine and thus accumulated high levels of phenylalanine which can result in brain damage.

However, the increase in obesity and diabetes seems to correlate with the increased consumption of diet sodas. See the Apple A Day RX blog on the Diet Soda Debate. This is not a coincidence!

Another consideration is the biased scientific publication. The Sydney Morning Herald newspaper published an article that stated, ‘Industry funding into the efficacy of artificial sweeteners in weight loss is nearly 17 times more likely to deliver a favourable result than independent research’.

It is only a matter of time when the FDA and EFSA change their stance on this. Currently California is considering adding aspartame to its ‘Proposition 65 Listing’; this requires labelling warnings on products containing substances “known by the state of California to cause cancer.”

So, the take- home message is to think twice before using aspartame.