Complementary Medicine Study Shows the Dangers of the Daily Tipple 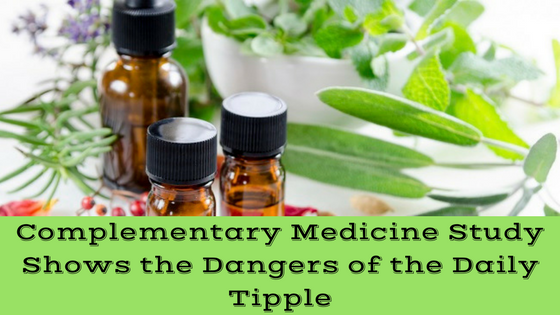 Traditional medicine hails from indigenous cultures around the world and has a major influence on today’s practice of Complementary and Alternative Medicine. One of the commonadvice’s from all Traditional medicine systems is to avoid habitual intake of alcohol. The reason for this is because regular intake of alcohol will disrupt the imbalance in the body elements /bio-energies e.g. bioenegries, doshas, the flow of prana and chi. Alcohol is only used in traditional medicine systems such as Ayurveda, the sister science of yoga (and meditation) for medicinal purposes i.e. a vehicle to deliver herbs to their target tissue. Furthermore, alcohol a good solvent for the herbal active components and is also an excellent preservative.

For example, as an Ayurvedic practitioner, I often prescribe a ‘Draksha’ which is a medicated wine used for a variety of remedies, including cardiovascular, immune, skin,reproductive and digestion problems to name a few. As we know, alcohol is absorbed very quickly into the blood stream, and the herbs in the wine are then carried to their target tissue (dhatus) where they are most needed. This is also prescribed for a maximum period of 3 months.

The Growth in Alcohol Sales

In today’s world alcohol has become one of the most popular recreational drugs. The production of wines, beers, and distilled spirits continues to grow with more than $200 billion sales in the US alone. The consumption of alcohol is deeply embedded in many countries around the world such as the traditional English pub; the German beer garden; the custom of drinking wine with the meal in France and Italy; toasting champagne at celebrations – the list goes on.

However, research has now validated what alternative medicine practitioners have always known i.e. avoidance of alcohol is good practice for preventive healthcare. Conventional research studies have revealed that alcohol is a causal factor in 60 types of diseases and injuries and a component cause in 200 others. In addition, a high proportion of violent crimes, especially domestic violenceis also associated with drinking.

Many folks drink wine or beer, on a daily-basis and especially after a stressful day at work. Previously,research (probably funded by the wine making companies) had determined that red wine drinkers had significantly increased their levels of good HDL cholesterol. Many people are adamant that a regular tipple is the key good health which is a concept that is not embraced by traditional medicine systems such as Ayurveda, traditional Chinese medicine, yoga and meditation to name but a few.

However, the bad news for having a‘daily tipple’ has now come from American Institute for Cancer Research (AICR) and the World Cancer Research Fund (WCRF). The researchers found that drinking just one small glass of wine, beer or other alcoholic drink (about 10 grams of alcohol) per day increases pre-menopausal breast cancer risk by 5% and post-menopausal breast cancer risk by 9%; a standard drink is 14 grams of alcohol.

Therefore, it follows that following the standard Complementary and Alternative Medicine practice of avoiding your daily tipple is the key to good health.