The Future of Healthcare – Epigenetics and Integrative Medicine 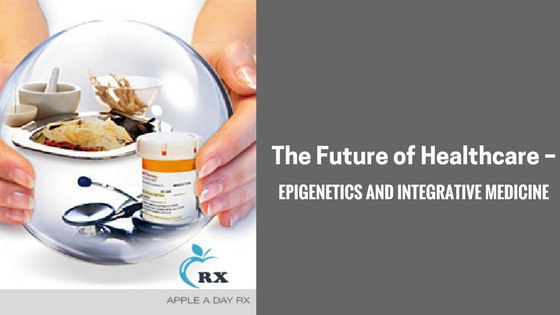 In my last year working as a senior cell biologist and biochemist for a pharmaceutical giant in 1999, the company had just become involved in the human genome project.This was an international research project that was set up to determine the sequence of the human genome and identify the genes that it contains.

However, there are now more questions than answers. For example, prior to the human genome project, the expectations were that there were 100,000 plus genes, but the project revealed that there were only 25,000 genes in humans; similar in number to fish and mice. So, what does this all mean?

Epigenetic modifications can occur in response to environmental stimuli such as dietary habits, lifestyle and some believe,our thought patterns. Your epigenome is much like the software, which tells the DNA hardware what to do. It’s the epigenome that tells our cells what sort of cells they should be – a skin cell, a heart cell, etc. Therefore, the external signal is important in the control of genes.

As the science of epigenetics evolves the importance of food, lifestyle and how we think, which are important tenets of Integrative Medicine and holistic healthcare treatment will become essential components of conventional healthcare. Integrative medicine has always emphasised the importance of environment, diet and lifestyle factors.A research study showed that men who started smoking regularly before the age of 11 had sired sons who, on average, had 5-10kg more body fat than their peers by the time they were in their teens exposure to tobacco smoke before the start of puberty may lead to metabolic changes in the next generation.  There are now several key studies that have shown the how the environment of an individual can switch their genes on and off. This also adds to the new body of evidence that babies may retain some parental baggage has enormous repercussions for child development.

The importance of Integrative healthcare

There is now an abundance of scientific evidence that we now have a significant control over our health. Thus, it is foolhardy to ignore the holistic healthcare or integrative treatments which examine our diet, lifestyle, environment and ways of thinking. While the scientists argue that your thoughts control your DNA is science-fiction, we must still recognise the fact that the subconscious negative thoughts often result in negative outcomes in healing.

Therefore,using holistic healthcare approach to chronic disease,rather than ‘here is a drug and that will cure you’ will in time become an out-dated approach as more people understand the importance of the inclusion of integrative therapies such as CBT, Hypnosis, Lifeline Technique, Kinesiology, Nutritional medicine, Ayurveda, Yoga and Meditation, etc, which addresses the holistic treatment which is the key to treating chronic diseases.