Deepen your Meditation Practice with this Wonder-Herb 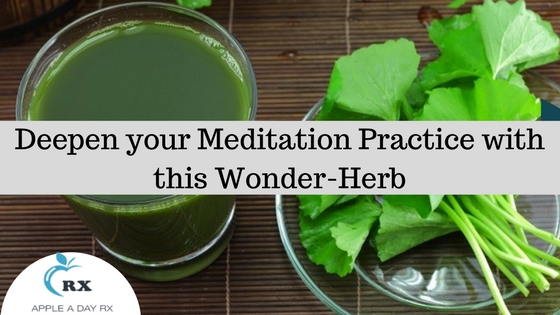 Brahmi is one of the most important herbs used in Ayurveda, Yoga and Meditation.

Experienced practitioners of Ayurveda and Meditation regard Brahmi as a key complementary medicinal herb. Brahmi is a Sanskrit word and refers to the feminine essence of universal consciousness as well as the creative potential that emerges from pure awareness.

David Frawley the well-known Ayurvedic physician states that Brahmi is an important food source as it also enhances the experience of meditation. In accordance with chakra physiology, Brahmi is said to help awaken the crown chakra and thus improves meditation.Swami Sivananda, the famous Yogi referred to Brahmi as a precious herb that increases memory and bestows a long-life due to its widespread effects.

Brahmi also helps us give up addictive habits such as the sugar habit or cigarette smoking.

The active molecules responsible for the pharmacologic effects of Brahmi include alkaloids, saponins, and sterols 21.

Complementary medicine research studies have shown that Brahmi acts on the brain, nerves, urinary system and the skin. However, it is popular for its mind-enhancing properties and support of the nervous system. Research has uncovered a myriad of possible neuroprotective mechanisms. Steroidal saponins and Bacosides A and B in Brahmi are the active chemical constituents responsible for improving both learning and memory.

CAM research has shown that Brahmi improves cognition by reducing anxiety. It main mode of action in the promotion of neuron connections; the improved brain communication makes it easier for the body to manage chemical stress triggers.

How to take Brahmi

Traditionally, Ayurveda and Yoga practitioners take Brahmi with ghee. According to Ayurveda, ghee is fat soluble and the ghee acts as a transport vehicle for Brahmi to the tissues.

The most popular form of the Brahmi nutritional supplement is available in capsule form from various companies.

Another popular option is to take Brahmi as a tea prior before meditation. The recipe is as follows:

Steep the Brahmi in 250mls of hot water for 10 mins or gently simmer in a pan. Then pour the tea through a strainer into a cup and then only add the honey when the tea is warm (not hot).

So, give Brahmi tea a try to help deepen your meditation practice and improve your general health.