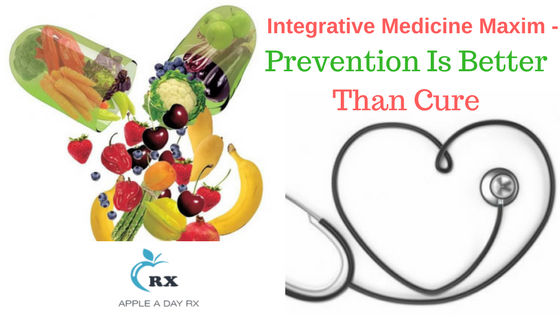 The Apple A Day RX maxim has always been and will always be ‘prevention is better than cure’. This ‘modus operandi’ has been the core of many traditional medicine systems and integrative healthcare practice. Preventive healthcare is often ranked low by healthcare agencies around the world but the evidence for preventive interventions keeps growing.

As the aging population grows so the incidence of neurocognitive disorders continues to increase. So, it follows that preventing the onset of neurodegenerative disorders is essential.

A new study published in The Lancet from 24 international experts has provided recommendations for the prevention of dementia.They suggested that one in three cases of dementia is preventable.

The researchers recommended that increasing education in early life could reduce dementia by 8% as continuing secondary education (at least to the age of 15) helps strengthen neural networks. Furthermore, they suggested that treating mid-life hearing loss can reduce dementia cases by 9%; they postulated that hearing loss may be linked to social isolation.

The findings from the Lancet Commission on dementia, prevention and care is congruent with the integrative medicine and holistic healthcare treatment model i.e. lifestyle intervention factors.The Lancet commission consisted of 24 international experts who systematically reviewed existing research and provide evidence-based recommendations for treating and preventing dementia.

The future of Dementia Care

The Lancet Commission on dementia have stated that the number of Dementia clients will increase from 47 million currently to 115 million by 2050.They further commented that, “We have not incorporated other potential risk factors, such as diet, alcohol, living near major roads, or sleep, which could be relevant,” it said. “Therefore, the potentially preventable fraction of dementia might be underestimated in our figures.