The Growth of the Geriatric Complementary and Alternative Medicine Market 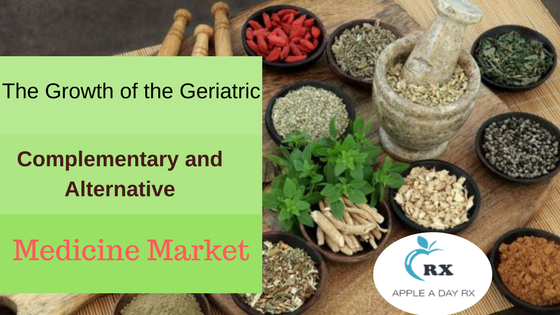 Chronic diseases include many health conditions, which co-exist with many risk factors. The incidence of people with chronic disease increases with age. This is especially true if a preventive medicine strategy has not been followed.

The popularity of Complementary and Alternative Medicine (CAM) continues to grow exponentially with:

The World Health Organisation predicts that the number of people aged 65 years and over will increase from 605 million to 2 billion by 2050.  Thus, it follows that the use of CAM amongst seniors will grow. This is reflected by a survey from the National Center for Complementary and Alternative Medicine (NCCAM) AND the American Association for Retired People (AARP) which concluded that 80 percent of the geriatric population globally uses at least one complementary medicine.

Europe is the second largest market for geriatric CAM; this is mainly attributed to increased ageing and the growing popularity of Complementary Medicine in Europe. Asia Pacific is also a rapidly growing CAM market. Japan is expected to follow China with increasing ageing population and a desire for Alternative medicines.

A key example of the growth of the CAM market is the Australian company Blackmores. The Blackmores share price in August 2014 was $25 but after entering the Chinese market the share price soared to $220 in 2015.

Countries such as China, Japan and India have a history of traditional medicine practice, and their populations understand the concept of holistic healthcare. These populations are also keen to ‘modernise’ by following typical western consumer practice, therefore, the growth of geriatric CAM market is ongoing. However, CAM companies need to be mindful of their marketing practices. Recently, Blackmores were fined in China for making claims its products could treat ailments such as cardiovascular disease and arthritis.